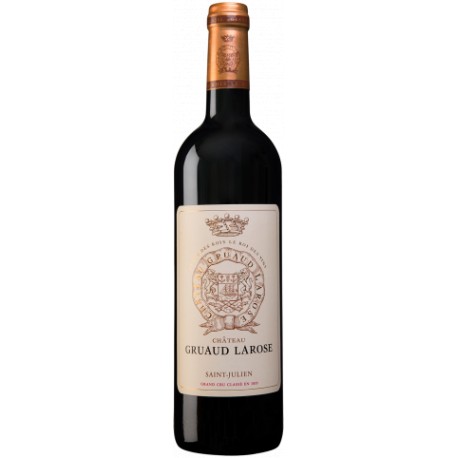 Château Gruaud Larose was founded in 1725 by Abbé Gruaud, whom he bequeathed in 1781 to his nephew the Chevalier de Larose to give it his name.

Since 1997, the Merlaut family has taken over the reins of the property, emphasizing work on the vineyard using organic methods, promoting integrated pest management and respect for the terroir.

All in one piece, on croups of deep Garonne gravel dating from the Quatenaire era (approximately 600,000 years), Château Gruaud Larose is one of the rare historic growths of the Médoc and more than ever respects its rank of Second Cru Classé. in Saint-Julien.

Like the famous phrase written on the label of Gruaud Larose proclaiming him as the "King of Wines, Le Vin des Rois", Cabernet Sauvignon on this terroir is the king of grape varieties and gives all its letters of nobility to wines from the château.